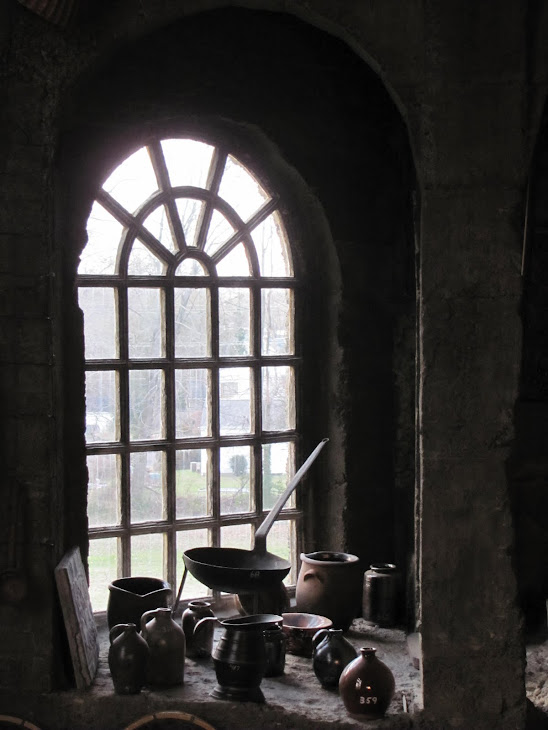 "What one can see out in the sunlight is always less interesting than what is behind a windowpane."

See You in September!

I'm taking a couple weeks off from posting to refresh, reorganize and get the kids ready for school. See you in September!

Jill
Posted by BucksCountyFolkArt at 7:04 AM 6 comments:

Since last Halloween, my daughter Mary, has been asking if we could have a party this year. After researching ideas, I thought it would be more fun to have a "Fall Harvest Moon Party." Instead of decorating with spooky items, I prefer more of a country feel with pumpkins, haystacks, garlands made of leaves, and anything earthy.

It's so much fun to make my own decorations, but supplies can add up. Here's one way I saved a good $30 using palm-sized, Dollar Store pumpkins. 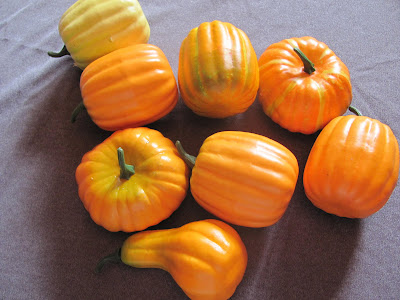 After checking out both AC Moore and Michaels, I found that the Fall decorations are pretty expensive. I'm sure once it gets closer to Halloween, there will be major sales, but I'm a Mom who likes to plan and make things ahead.

The pumpkins at Michaels had the earthy feel I was going for, but at $7.00-$8.00 each, I needed to rethink my game-plan. Why not try the Dollar Store? Sure enough, I found the pumpkins (above) and decided to do a wee bit of experimenting. 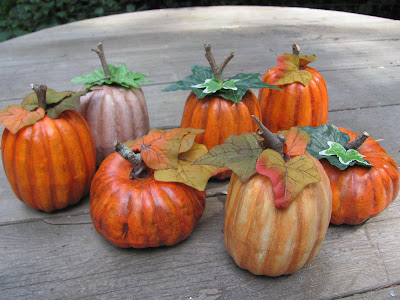 After priming the pumpkins with 3 coats of Gesso (darn little buggers!), I then painted them using different shades of orange, yellow, brown, and cream. 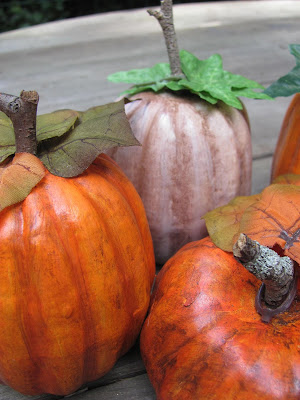 Next, I applied antiquing gel for an aged appearance. Although I usually prefer a neutral sheen to my pieces, I gave these pumpkins a high gloss finish. 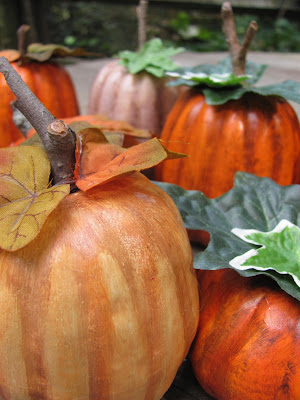 Still experimenting, I popped out the plastic stems and inserted real twigs. They fit nice and snug without needing glue. As a finishing touch, I attached Fall leaves taken from a Dollar Store garland, near the base of the stem. 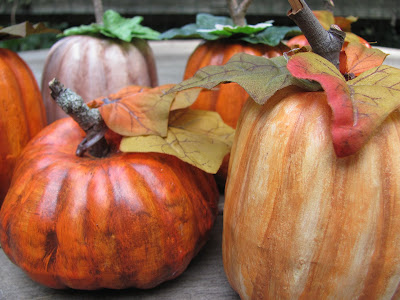 Seven pumpkins cost me less than $10, saving me at least $30 I would have otherwise spent at Michaels. Now that I know how easy they are to touch-up, I may need to get some more! The beauty about decorating for the Harvest is that it lasts all season.

Just thought I'd pass on this idea. There are ways to fight the economy and still look good!
Posted by BucksCountyFolkArt at 3:18 PM 7 comments:

For the past 5 days, I've been stuck home with 2 feverish children. For self-preservation, I started creating Fall decorations. 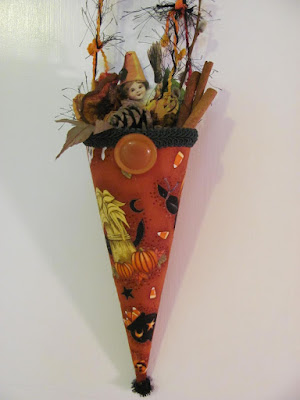 This tussie-mussie was made from rolled up cardstock covered in Halloween fabric. I then used green trim to line the top and added an old burnt-orange button. Feeling satisfied with how it looked, I looped "fun fur" around the top of the cone to be used as a hanger, and attached a sparkly black pom-pom to the bottom. 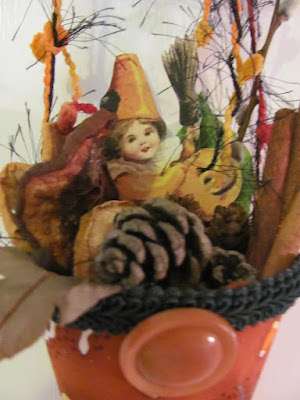 The cone was filled with fragrant home-dried apples and oranges, tiny pinecones, faux leaves, and scented cinnamon sticks. Finally a vintage Halloween image of a child was tucked deep inside. 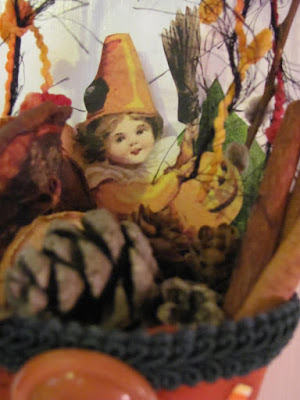 Taking care of sick kids, sleep deprivation, cabin fever, and being sick myself, left me feeling completely depleted. Making a simple Victorian cone brought me some much needed peace and genuine happiness.

Sledding with an Angel!

Angels are with us wherever we go. 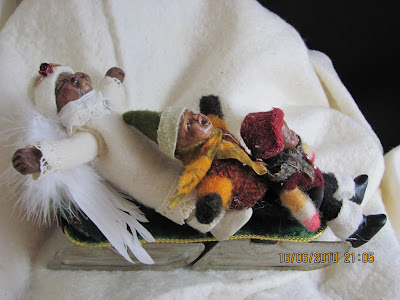 And who more than rough and tumble little boys need their Guardian Angel to keep them safe? 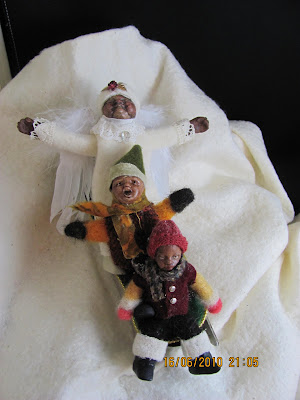 Looks like Reuben James is having a wild time sledding, while little Marco would rather be making a snowman safely on level ground! 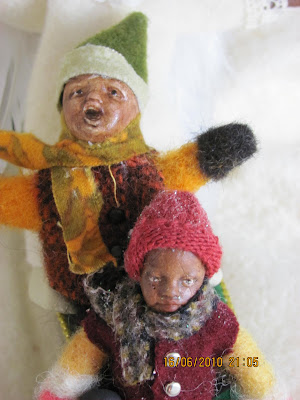 I used paperclay molds from antique German dolls to create the boys' faces. Their bodies are needle-felted and clothes are created from pure wool. Little Marco stands only about 2 1/2 inches tall. 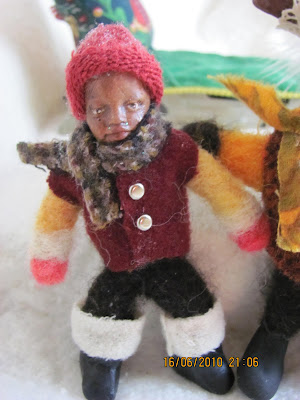 This is Leviticus. I really liked the contrast between the brown hue of his face and hands, against the creamy whites of his body and wings. 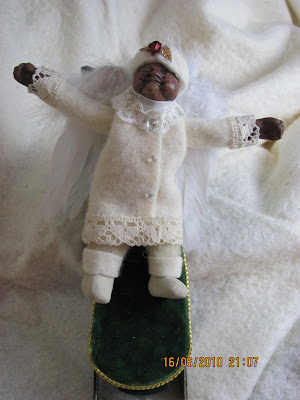 Does the sled look familiar? It's an old metal iceskate! After attaching green velvet fabric and gold cord, I added a fluffy pillow to the back. 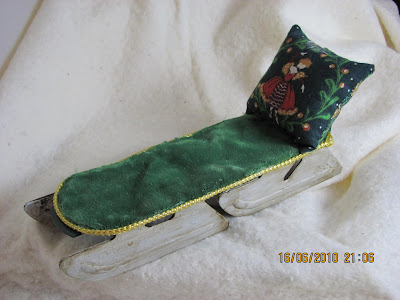 Leviticus's face is molded from an antique black baby doll I bought at an antique show. His big puffy cheeks remind me of Louie Armstrong. That's one coooool cat! 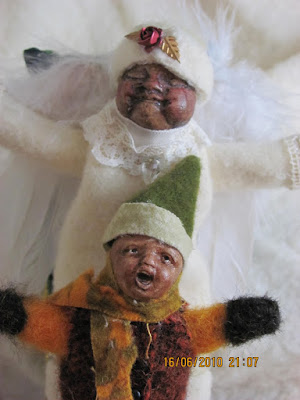 I love the idea of a angel not only watching over the boys, but joining in the fun! 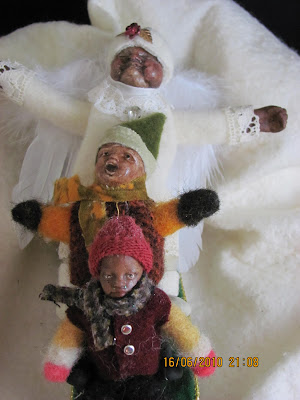 Posted by BucksCountyFolkArt at 8:22 AM 4 comments:

Do You Ever Stick Your Tongue Out at Your Work?

Have you ever had one of those days where try as you might, what you're working on just fights you tooth and nail? So you put it down and walk away from it, yet like the very mature "grown-up" that you are, you wind up sticking your tongue out at it every time you walk by?

You can feeeeel it taunting you, "Come finish me! I'll cooperate this time; you'll see. Really. TRUST ME!"

Like Eve biting into the forbidden fruit, I pick it up again, knowing deep in my heart I shouldn't. The temptation is too great. As crazy as it sounds, I would swear the paper clay face I sculpted suspiciously changed from smiling at me to smirking.

OK, I may be exaggerating for dramatic effect, but you get the idea!
Posted by BucksCountyFolkArt at 10:07 PM 3 comments:

Getting Ready for Halloween

I've been hit with the Autumn Harvest Bug so everything I touch now has elements of the Fall. I was so excited to finally break out my Halloween fabric! 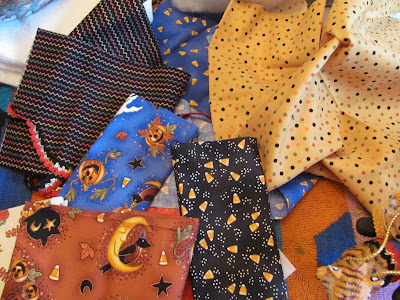 Hand-carving wooden pumpkins and needle-felting Halloween characters have been my driving force lately. 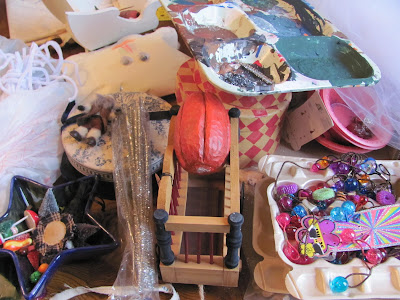 Currently, I'm working on a Circus-themed piece. So far, I needle-felted a wool clown and have him riding a tiger. Originally, I wanted an elephant, but the orange and black stripes of the tiger were perfect colors for Halloween. 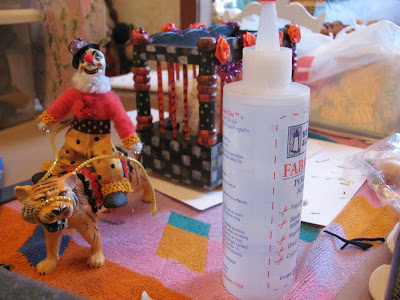 I found some "Boyds Bears" circus wagons at my local thrift store that I knew I HAD to have! After painting and decorating this one for Halloween, I added a sign on both sides advertising an up-coming Halloween Costume Contest. So far, I've got a clown, a witch, and a mummy entering the contest. 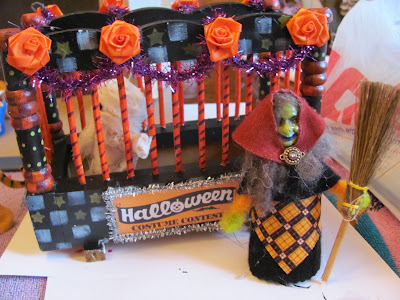 This clown was so fun to make, I may have to make some more! 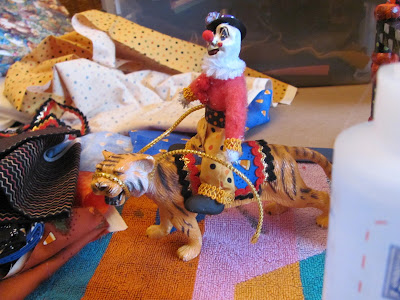 Some people shake their head at all my supplies, but I say, you have to have the right tools for the job. 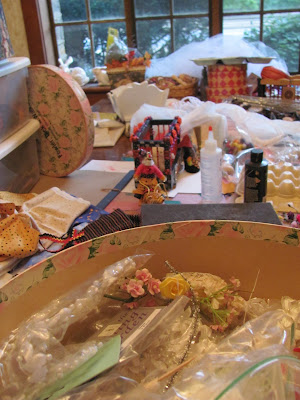 Here's a little elf waiting for a home. Patience, little guy. I'll find a place for you yet. 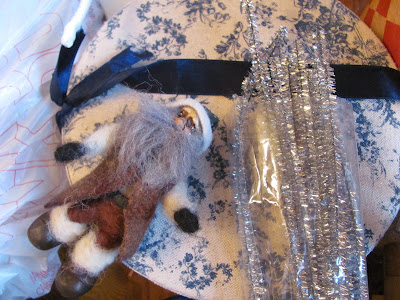 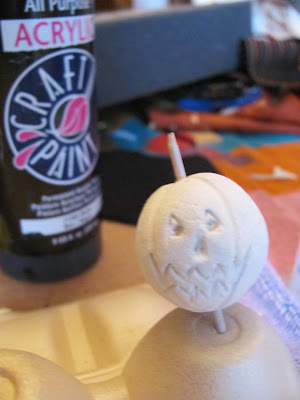 I didn't realize how much Halloween trim I had until I dug through this old hat box. Rediscovering supplies is half the fun! 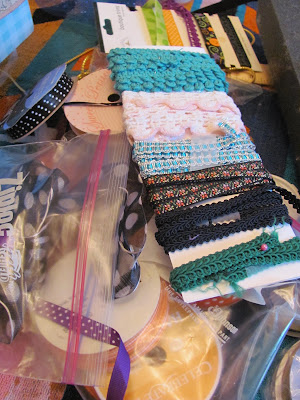 Can't wait to show you the finished piece!
Posted by BucksCountyFolkArt at 5:31 PM 3 comments:

It's the Great Pumpkin, Charlie Brown!

Over the years, my friend, Beth, has accumulated a mountain of Snoopy items. You know how it goes, people find out you're interested in something and the next thing you know, every birthday and Christmas you're inundated with more to add to your collection by well-meaning friends and family.

Beth recently told me, "Unless it's special or unique, I really don't need any more Snoopy items; it's getting pretty ridiculous!" Well, that got my wheels spinning. Out of the millions of Snoopy items in the world, could I actually make something unique for Beth? Breaking out one of my trusty Altoid Tins, I took the challenge!

First, I wanted this Altoid to be able to open and close so I had to plan accordingly. I decorated the lid by using Halloween scrapbook paper, trim, and purple flowers. 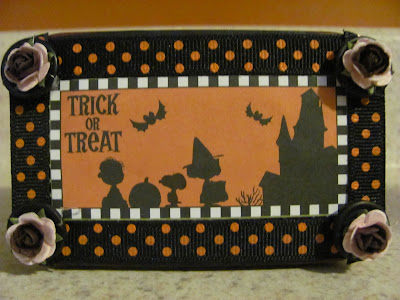 When Beth opened the lid, she was greeted by the Peanuts gang! 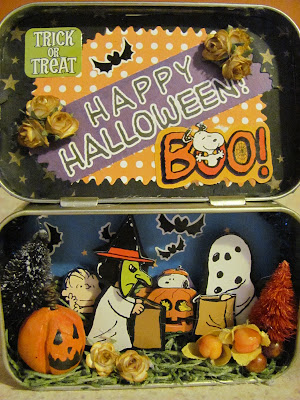 I embellished the top with Halloween scrapbook paper, stickers, and burnt orange flowers. 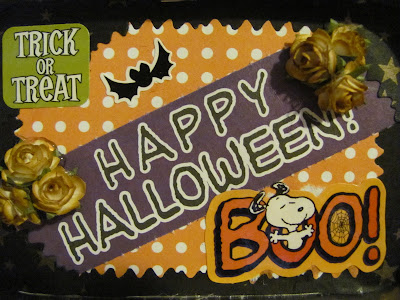 By sticking little squares on the back of some of the characters, it pushed them out further, giving the piece more dimension. For a 3-D effect, I added a hand-sculpted paper clay jack o'lantern, grass, orange paper flowers, and vintage plastic flowers. Finally, to really make this scene *pop*, I added miniature bottle brush trees that I hand-dyed orange and black. 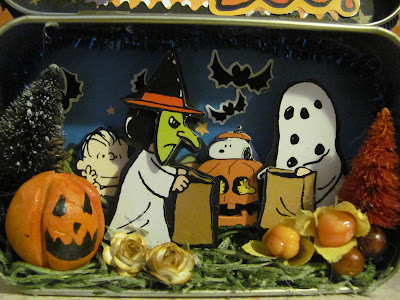 Did Beth like it? Well, I got a call from her last night telling me whenever I want to make her something, to feel free!
Posted by BucksCountyFolkArt at 11:40 AM 5 comments:

BucksCountyFolkArt
My passion is combining old with the new by restoring and salvaging items that would otherwise have been thrown away. Some may consider this "Altered Art" or "Mixed Media Art." I consider myself a good old-fashioned Folk Artist, with a strong emphasis on Holidays, Customs, and Traditions.